A eulogy in a technical blog

I’ve been absent from the blog for a while. This has several reasons, ranging from work, to lots of things to do outside work and what I’d like to take a moment to talk about today – the death of one of my cats.

I got Salsa, as she was called, back in May of 2001 when she was about 8-9 weeks old. She and her sister Tesla (along with a couple of other kittens) were born on March 15th, 2001. Straight from the get-go it was obvious that they were very different from each other – most likely due to different fathers. Tesla is rather calm and thoughtful, and Salsa was everything you’d expect from a calico cat – all paws, more speed than control and an utter lack of consequence analysis. After less than a year me and my then-girlfriend separated and I received sole custody of two small balls of fur.
This was the way of things until I met my wife 10 years ago.

Fast forward to May 2013 where we had a very bad week. Tesla broke a tooth and required surgery, Amys, my wife’s cat of 14 years passed away, and Salsa was diagnosed with hyperthyroidism – a chronic, wide-ranging illness that would require medication morning and evening for the rest of her life. A year later Tesla was also diagnosed with this illness, something not unexpeced as they were siblings.

The medication worked out fine despite some tricky periods where we had to adjust the dosage. She had a great life, lots of love, lots of toys. And food. She loved food. So much we had a blimp for a while (this was somewhat due to the medication, but mostly due to her love for all things edible). We weathered that as well, and have had the pleasure to share our lives with a generally healthy and always happy pair of cats. Until yesterday.

I had paramedical training back in the late stone age, and looking at her beside me in the morning I realized that Salsa showed signs of somewhat labored breathing. After a short phone discussion with the vet we drove the 10 minutes to the local clinic for an emergency chest X-ray. The news were not good. She had a rather large amount of fluid in her lungs and around her heart, pointing to congestive heart failure. This is not that uncommon in older cats and especially not in an older cat with hyperthyroidism (and the resulting hypertension, despite medication). She received some diuretics and we were told to come back a few hours later for a follow-up X-ray to see if the fluid would be cleared.
After observing her for a few hours and noting no change in her breathing or level of activity, I decieded to call my wife and ask her to meet us at the clinic. From Salsa’s clinical presentation and the knowledge that none of the reasons behind the heart failure would be in any way curable (and most likely not treatable to any larger degree) we decided then and there to put her to sleep and end her suffering.

So there we have it – one of my best friends of 15 years is no more.

I am very, very thankful for the 15 years we had together – and all the ups and downs associated with any life. The picture below was taken a few minutes before we went to the vet for the final time. She leaves a cat-shaped hole in our hearts and she will be sorely missed.

Sleep well, my beloved calico cat. Say hi to Amys for us. 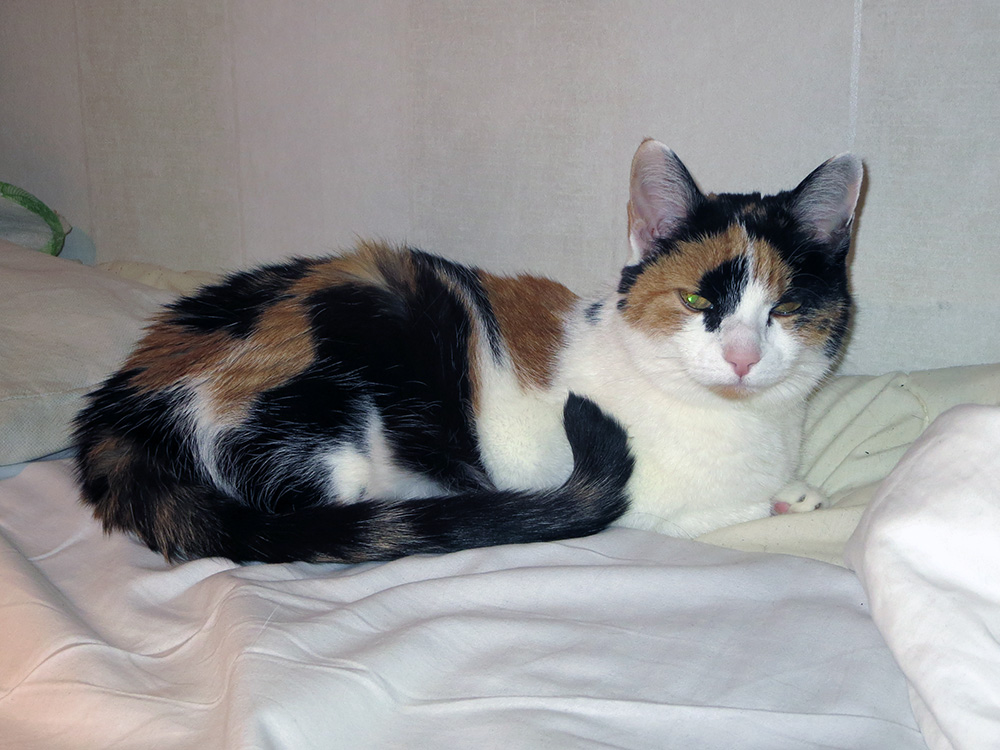