At TechMentor in Seattle this summer I asked Aleksandar Nikolic, a fellow European MVP, about the tiny machine he used when presenting. It turned out that he had recently acquired a Surface Go, a Surface laptop roughly the same size as an iPad. Since buying it he had left his heavier machine at home, he explained. It was indeed a smaller package - something that would be perfect for me as I try to only travel with a carry on. As trying to manhandle a laptop in economy seating is a pain, I usually bring an iPad as well..

The more I thought about it, the more I realized that this could be a great fit. It could literally do the work of several tools. Back in the old days I used to go for the most powerful machine available. These days most of the things I work with live in the cloud. While this means I’m kind of lost if I have no internet connection, most often I don’t need the extra power.

This translates to a smaller, lighter machine to haul around. It is the same size as an iPad and sports the same kind of detachable keyboard as a normal Surface. It shares another thing with iPads: it only has one peripheral connector. (Even though I just found an MicroSDXC card slot cleverly hidden underneath the kickstand). The connector in question is USB-C, so it can do pretty much anything.  Unfortunately this necessitated buying an adapter, but more about that in a bit. It sports a funny little processor: the Intel Pentium Gold 4415Y. At 1.6 Ghz and with only 8GB or RAM, this thing can never be described as a powerhouse. 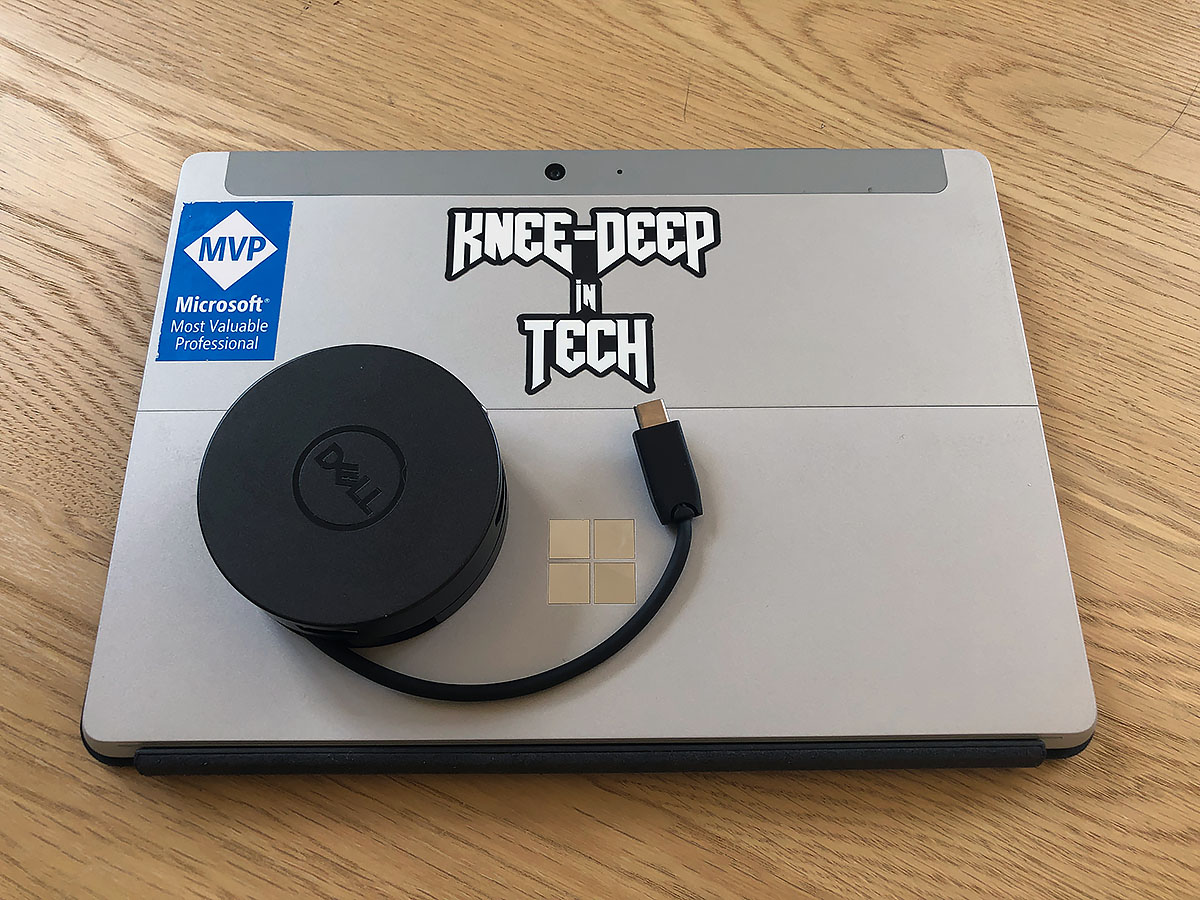 But does it need to be? My goal is basically to be able to do this:

This is a pretty serious list of things to ask from a 1.6Ghz CPU and 8GB of RAM.

But - before we do ANYTHING else - let’s get rid of the crippled Windows 10S on the thing. With Windows 10 S you’re limited to store apps, and I need to run whatever I want. Thus - it’s time to go into the Windows Store and switch out of Windows 10 S mode. Now - let’s give it a spin.

The first task I threw at it wasn’t that difficult - really. I wanted to be able to play movies using VLC or Netflix. In short: no issues at all with playing the content, but as always the Netflix app has some … interesting quirks. I had downloaded a few episodes of a series I wanted to watch on the plane. Unfortunately I had also applied an update to Windows. Equally unfortunately that update invalidated the downloaded episodes, leaving me with nothing to do for a 2 hour flight. It could be worse, but this always drives home the point of being at some company’s mercy when it comes to content.

The battery life of the Surface Go is advertised as up to nine hours. I don’t think I’ll get anywhere near that, but if I get six hours out of it I’m more than happy. That’s still plenty more than my Surface Laptop… With a decent battery life, the ability to remove the keyboard and sporting an excellent kickstand, the Surface Go did an admirable job of impersonating an iPad.

I’ll give it a clear pass for taking on the tasks of an iPad.

I’m using a Power Point clicker mounted on my left middle finger. That clicker is connected to the laptop using a USB-A dongle. There is no USB-A connector available on the Surface Go. There is also no VGA, HDMI or DisplayPort connector on the little machine either. All these things are kind of useful to a presenter. Thus, it was time to invest in a “do-it-all” dongle. There are several out there sporting some combination of USB-A, HDMI, DisplayPort and RJ45 connectors, but after reading a ton of reviews, I settled on a Dell DA300.

This little puck of connectivity does not come cheap though - at around $80 it better work as intended. With the puck connected I have all the connectivity I need and I could try to do my first presentation using this setup.

It was a disaster.

It was laggy as you would not believe. Working in Power Point felt like swimming in tar. Everyone I had talked to had said that the machine, while not fast, was quite able to pull the weight of a Power Point presentation without any issues at all. Did the the dongle cause the issue? Perhaps my presentation was too large? Was something else going on? The third reason turned out to be the culprit, and I’ll go into details in just a bit. With that thing taken care of, the little machine performed admirably and I was able to do my “Azure Machine Learning for the Absolute Beginner” session at the SQL Saturday in Oslo with zero problems.

I’ll give it a pass for running Power Point.

Surfing the web is a surprisingly strenuous task for a computer - especially if I am the one driving it. You see, I love tabs. I can’t get enough of them. That’s on me, I know, but it also puts whatever poor machine I use under a lot of strain. In short: the Surface Go can handle Edge Beta or Chrome without any issues - UP TO a reasonable number of tabs. Keep in mind that the most powerful version of the Go has only 8GB of memory.

I’ll give it a clear pass for surfing the web.

Then it was time to really turn the pressure up. Editing an episode of Knee-deep in Tech is completely doable on the Surface Go, some things just takes a bit of time. For instance - running a noise reduction filter is processor intensive. My main workstation at home sports 6 CPUs, each at 3.6Ghz. It also has 16GB of RAM. Something that takes 20 seconds on that machine is bound to take more time on the Surface Go.

At the end of the day, though, it doesn’t really matter as there is only so many times one need to run noise reduction filters. As long as you’re not expecting the Go to perform like a desktop powerhouse, I could find no issues with Audacity on the Surface Go.

That brings us to Resolve. Resolve not only uses the CPU, but it also enjoys a beefy GPU (as it is video we’re trying to edit, right?). If you thought that the CPU was on the … feeble side, wait ‘til you meet the GPU: Intel HD Graphics 615. I’ll just leave this link to a benchmark site here, and conclude that you never want to run Resolve on this machine. Ever.

I’ll give it a pass for audio editing and a hard fail for video editing.

So - back to the mystery of my first laggy presentation. After having a few issues with the whole machine being laggy, I traced my issues to Windows Update. Now - I don’t want to bash Windows Update as this is not a Windows Update issue per se, but Windows Update is very good at putting strain on a computer. It downloads a lot of information at the same time it is running the CPU AND harassing the hard drive.

To be blunt: this little machine can’t handle that kind of abuse without slowing down. Simple as that. My solution before taking to the stage in Oslo was to keep it simple and make sure the CPU was not taxed. I deferred Windows Update and turned off Windows Search. In fact, I’m going to look into changing the settings of Windows Search to see if I can lessen the impact of this service a bit.

In order to get a good presentation experience, make sure that the computer is not trying to do something else at the same time. Don’t update Windows, update Office, mine Bitcoin or whatever. For some reason I’ve found that my machine prefers a few minutes to “settle down” after being woken up (not unlike me, to be honest). Avoid tearing it from deep sleep in the bag and slam it straight into a technical presentation on stage and you’re fine.

There were some teething problems to begin with. Finding out during a presentation that the machine was slow as heck wasn’t fun at all. But it forced me to find the culprit, and my problems are now as good as gone. I have both lightened my bag AND gotten more space in said bag. I’m very happy to have bought the little thing despite having Aleksandar grinning from ear to ear when I did so.